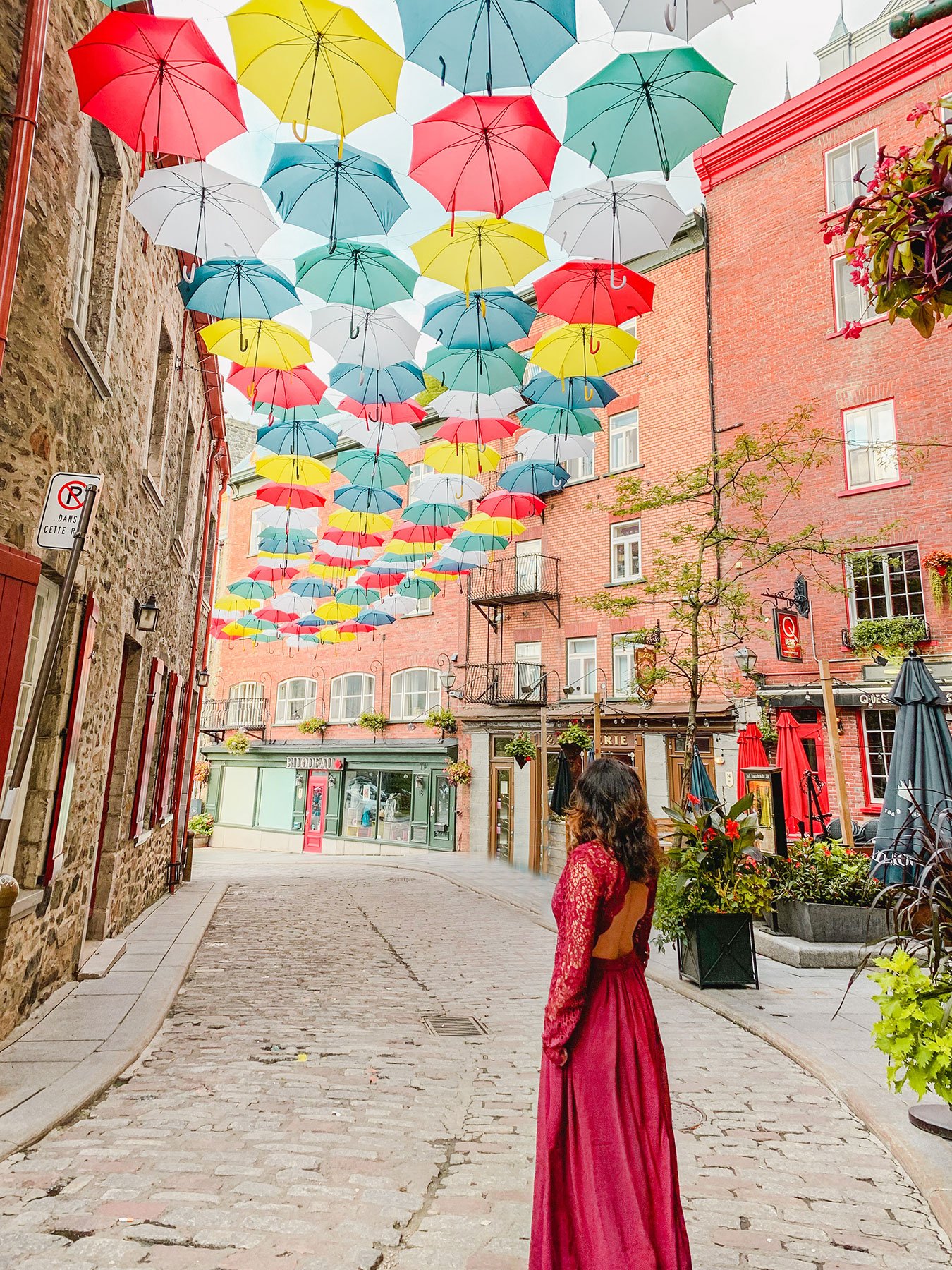 Back in September, we had visited the most charming city in Canada – Québec City. Québec City’s very European feel, well preserved buildings and history makes it a delightful getaway from Montréal, Toronto or the East Coast of the US. If you are visiting from elsewhere, you could also add Montréal to the trip and make it a week of exploring Québec. This is a comprehensive guide on how to spend 2 amazing days in Québec City with a little bit of history, Québec City’s European and French roots, best places to stay, things to do in 2 days and places to eat. 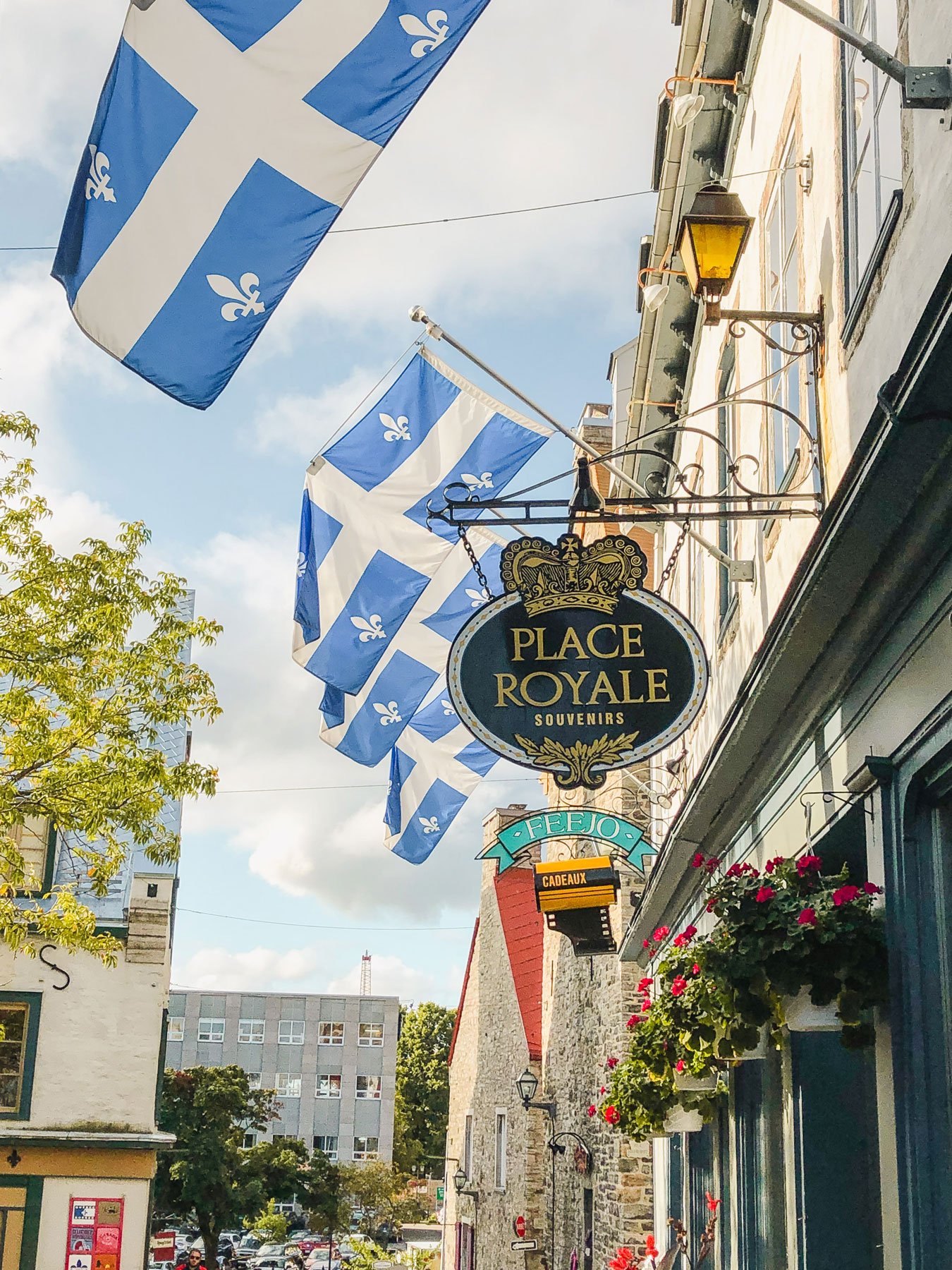 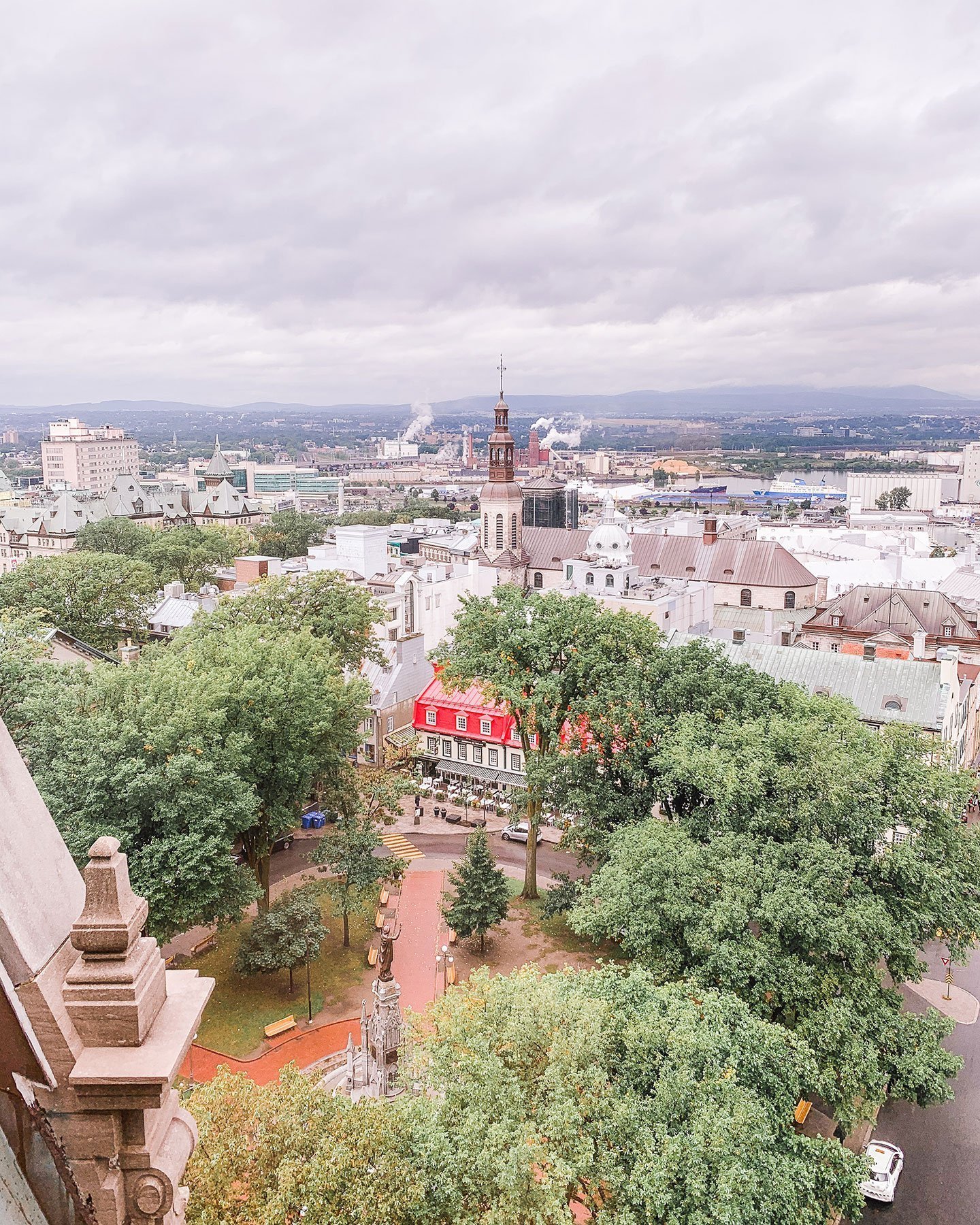 Where is Québec City?

Québec City is in the province of Québec in Canada and about 150 miles (250km) north of Montréal.

How many days do you need to visit Québec City?

Two days would be perfect to visit Québec City without being too rushed or too relaxed. If you would like to visit nearby places, you could add another day and make it a long weekend trip.

When to visit Québec City?

Summer is ideal but late spring and early fall are also perfect with fewer crowds and changing weather. If you don’t mind the snow, winter would be an incredible experience with lots of Christmas decorations and snow events! I would love to go back in winter again! 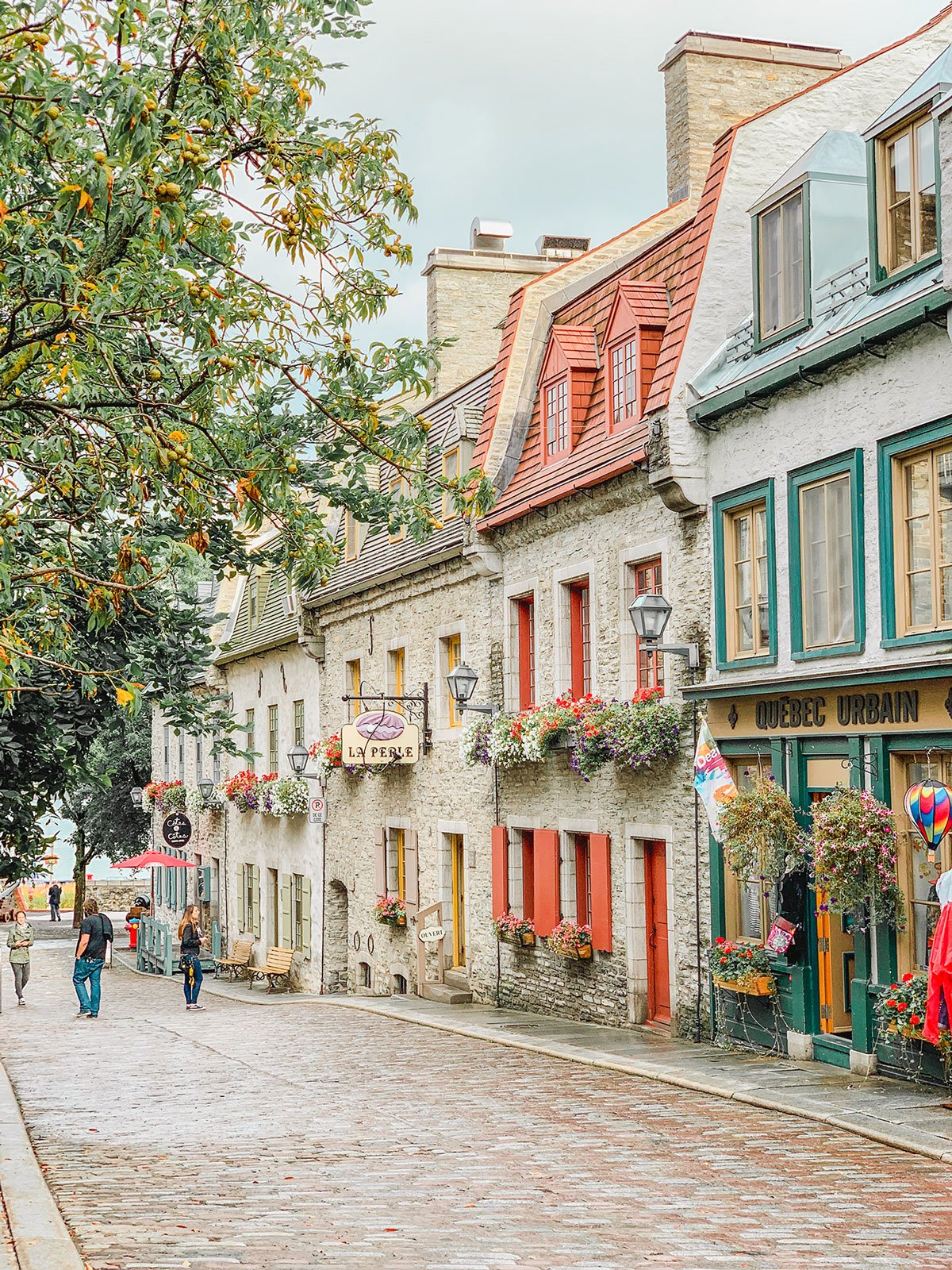 How to get to Québec City?

There is an International airport in Québec City. This is the best option if you are flying to/from Canada or the US.

For cheaper flights, Montréal airport is a better option.

From Montréal, you could take a train, bus or rent a car.

Do I need to rent a car within the city?

Not at all! Most of the major attractions are within walking distance of Vieux (old) Québec. Unless you want to venture out of the city to Montmorency falls or take short trips, you do not need a car. Even for those short trips, you could take a taxi or a tour.

Do I need to know French to visit? Do people speak english?

Almost everyone at hotels, tourist spots are bilingual and speak both French and English. It is always good to learn a few basic words when you visit a foreign country or city but it is not absolutely necessary. 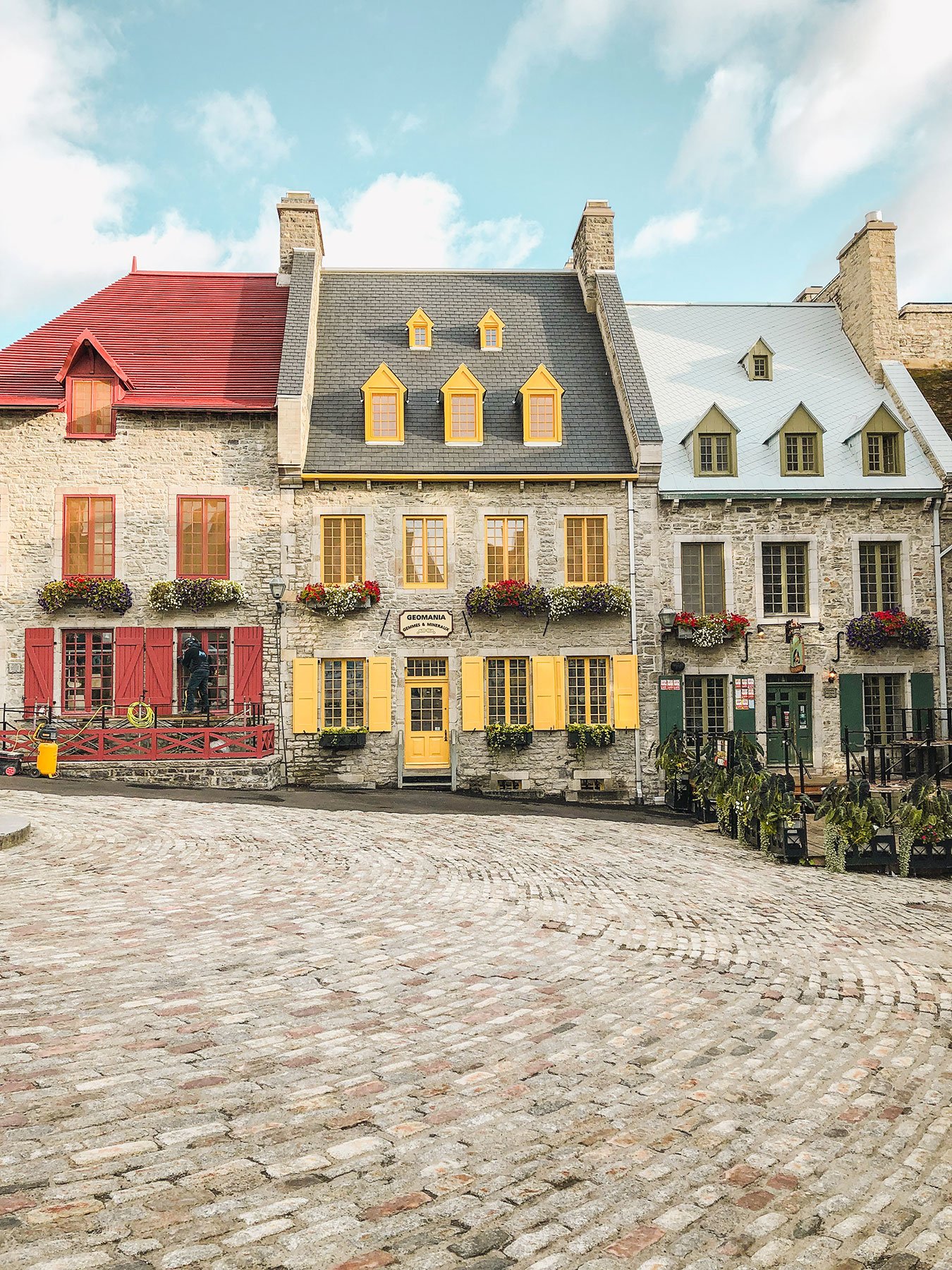 If you are visiting in summer, the weather can vary between 70s and 60s (F).

If you are visiting in the winter, be prepared for freezing temperatures. 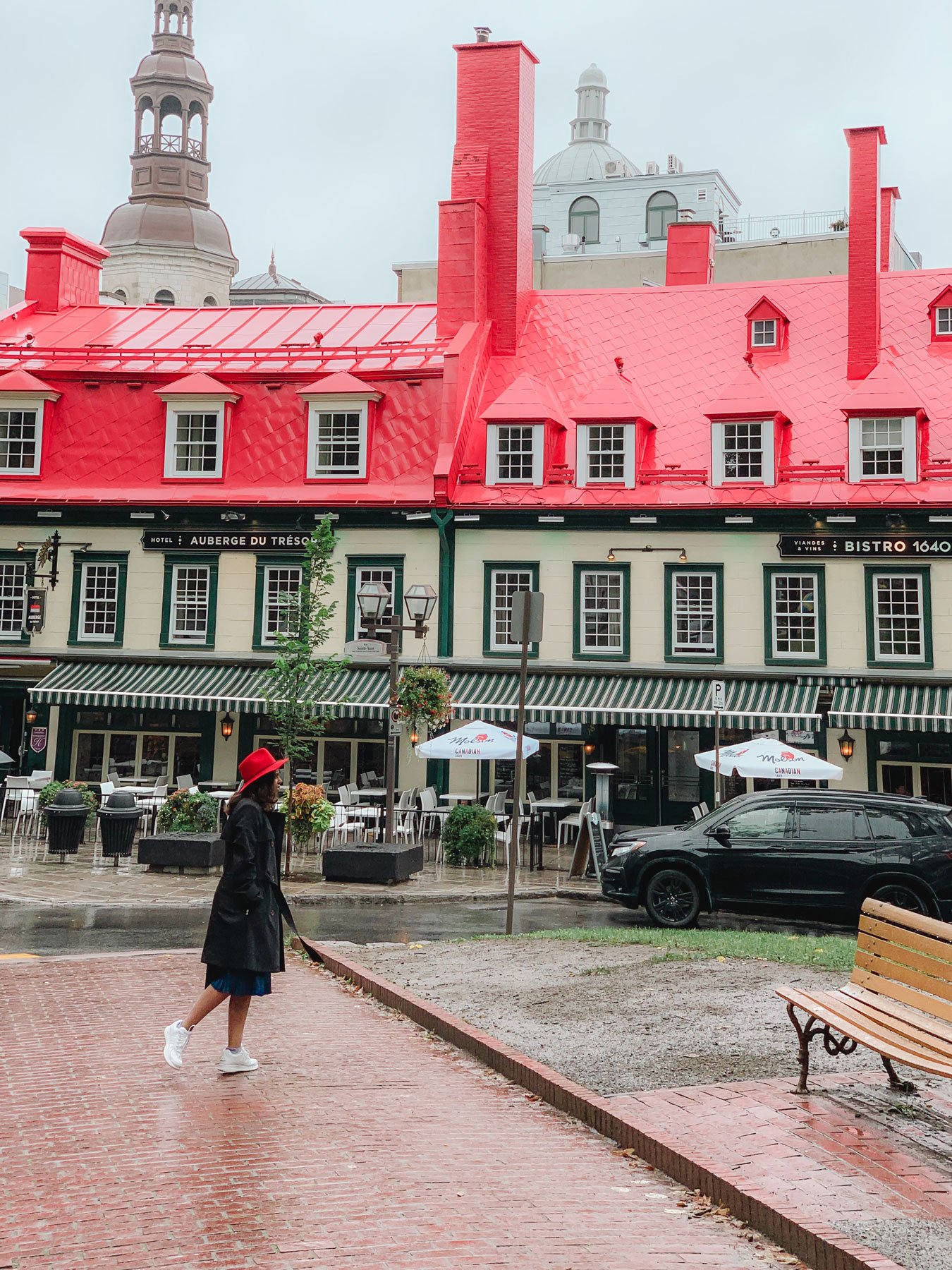 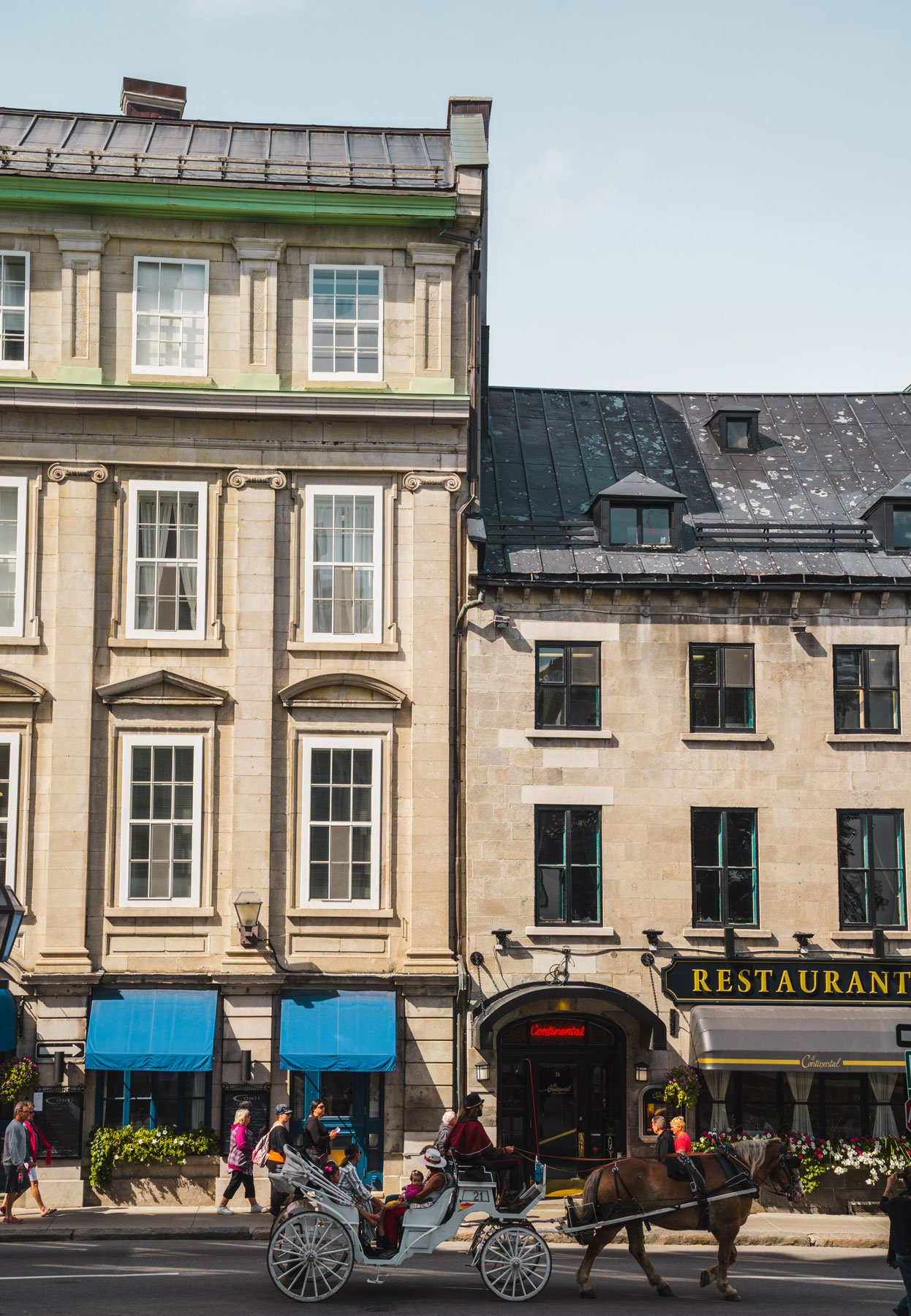 Québec is the only region in North America with a French speaking majority. I was surprised by how well the majorly French speaking Québec surrounded by English speaking populace thrived for so long!

Now that you have your history lesson, let’s take a look at the fun parts like where to stay, what to eat and how to spend two amazing days in Québec city.

Where to stay in Québec City?

My personal recommendation: Fairmont La Château Frontenac for its deep rooted history, opulence and many other reasons. 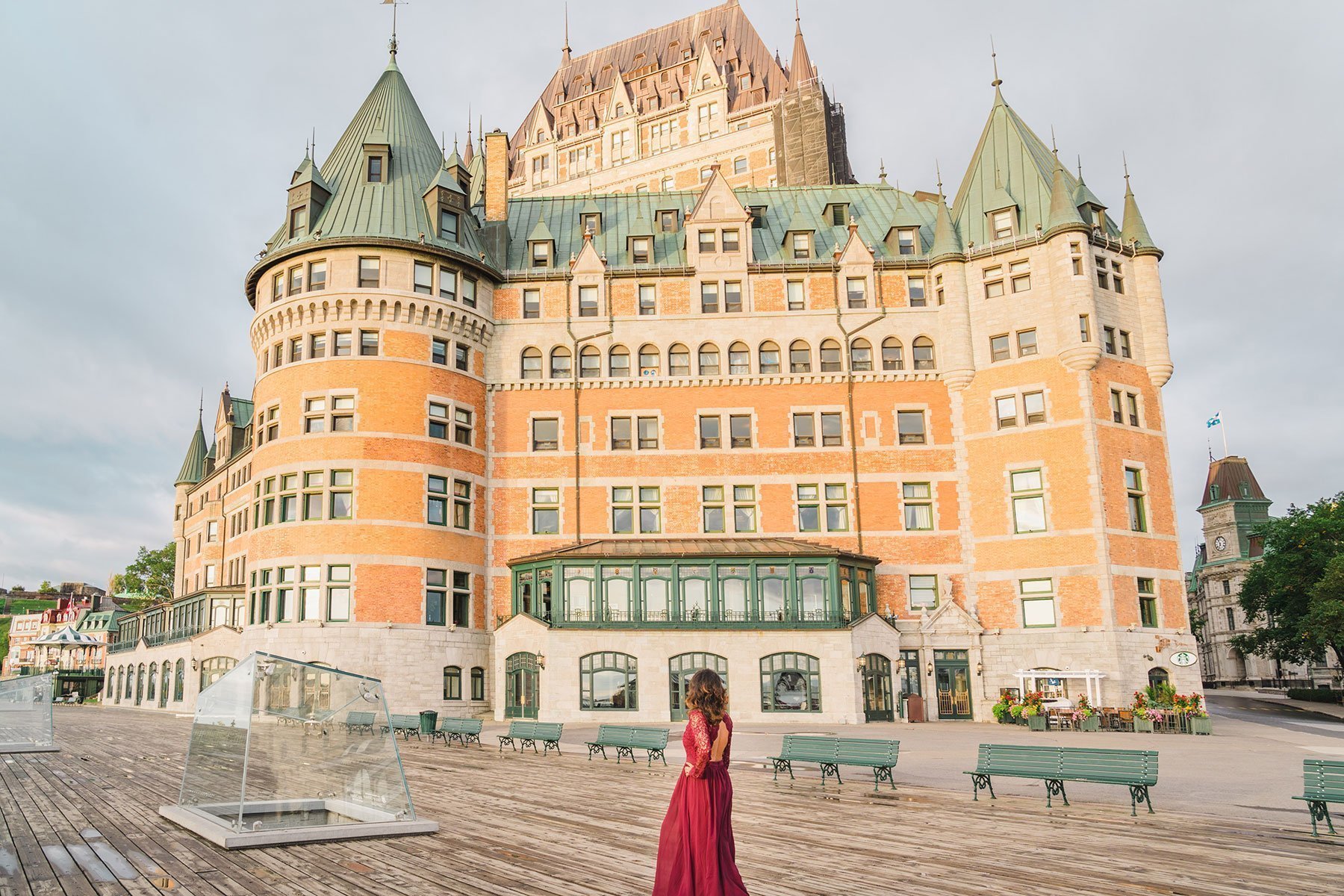 If you want a unique experience of staying in a monastery, try Hotel Monastère des Augustines, a monastery of Augustinian nuns turned into a hotel.

There are many other options in Old/Vieux Québec City that are a stone’s throw away from the center. Here is a list of hotels that I had researched and liked. 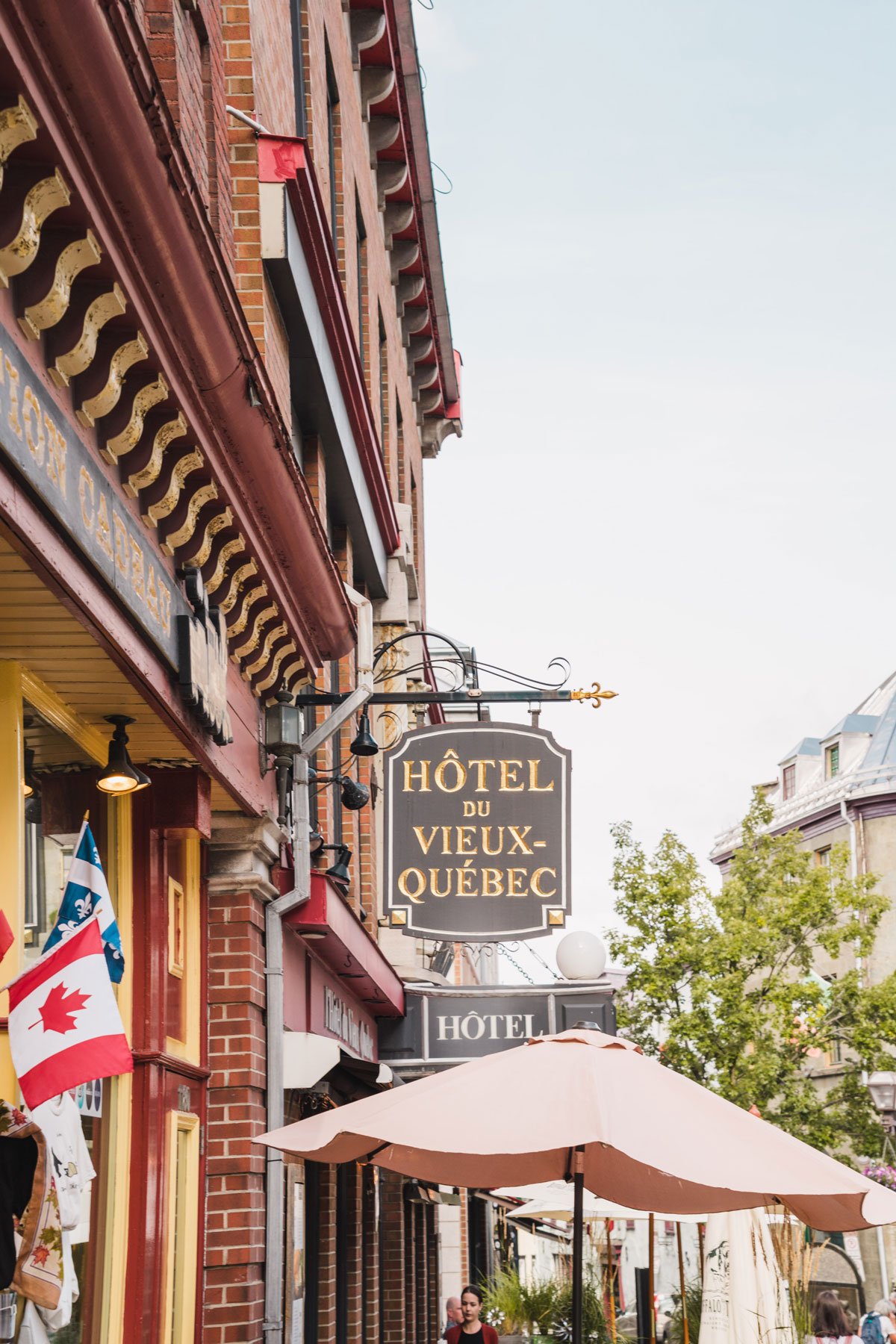 Where and what to eat?

There is a renaissance of sorts happening with Québec City’s food scene with an emphasis on farm to table and organic. It is safe to say that you will hear “honey from our rooftop”, “organic vegetable garden terrace” in a lot of restaurants. If you get a chance, try these restaurants for the best farm to table experience –

Other fun places to eat are

Famous dishes that you have to try in Québec City are the poutine, maple taffy, beavertails, crepes and seafood.

Day 1 fo the two days in Québec City can pretty much be dedicated to Quartier du Petit Champlain and if you can spare some time, take a short day trip to Montmorency falls if you feel like it. 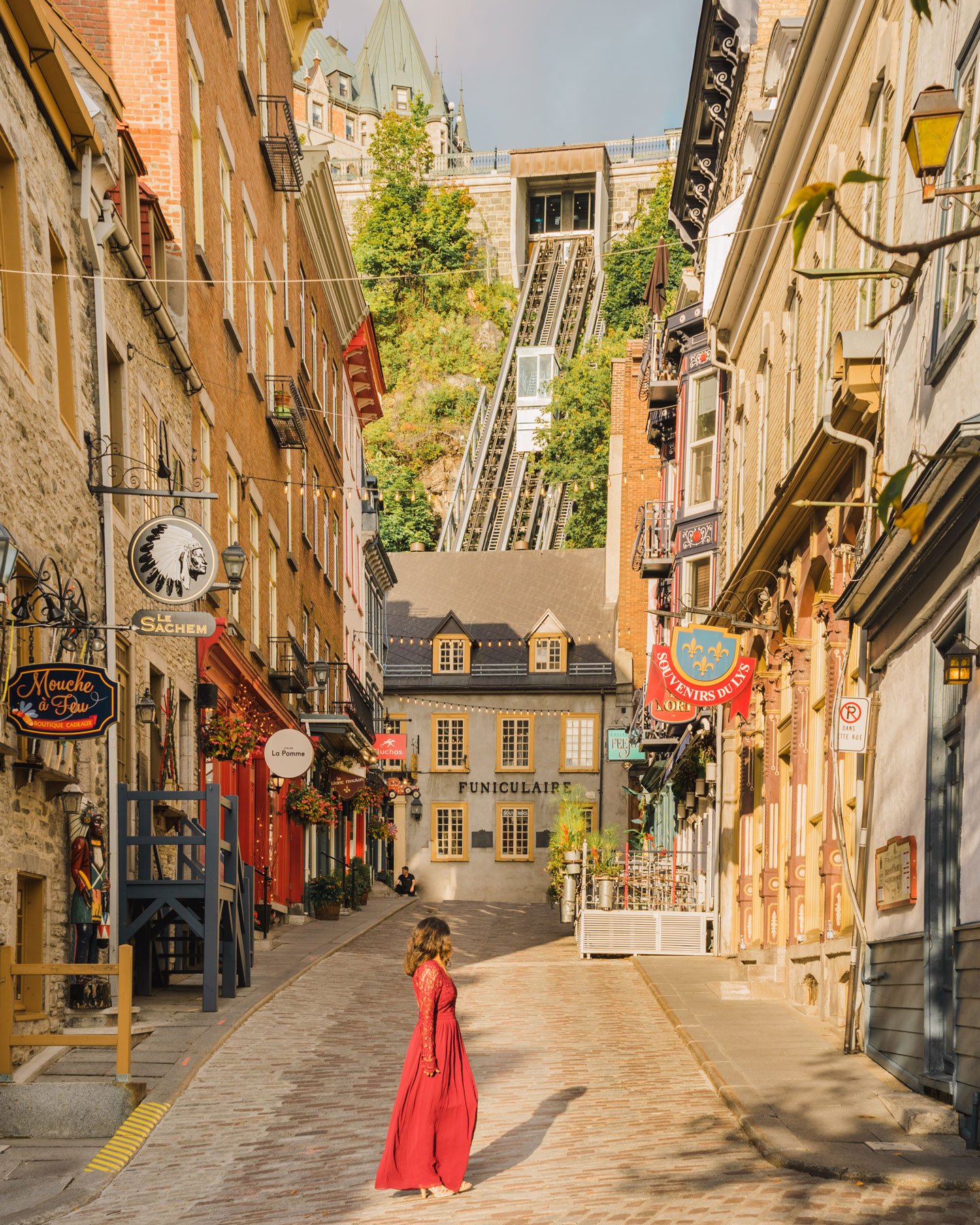 Petit Champlain is one of the oldest commercial areas in North America and is a fun place to explore with cool restaurants, boutique stores and art galleries. It is also one of the prettiest places I have been to! 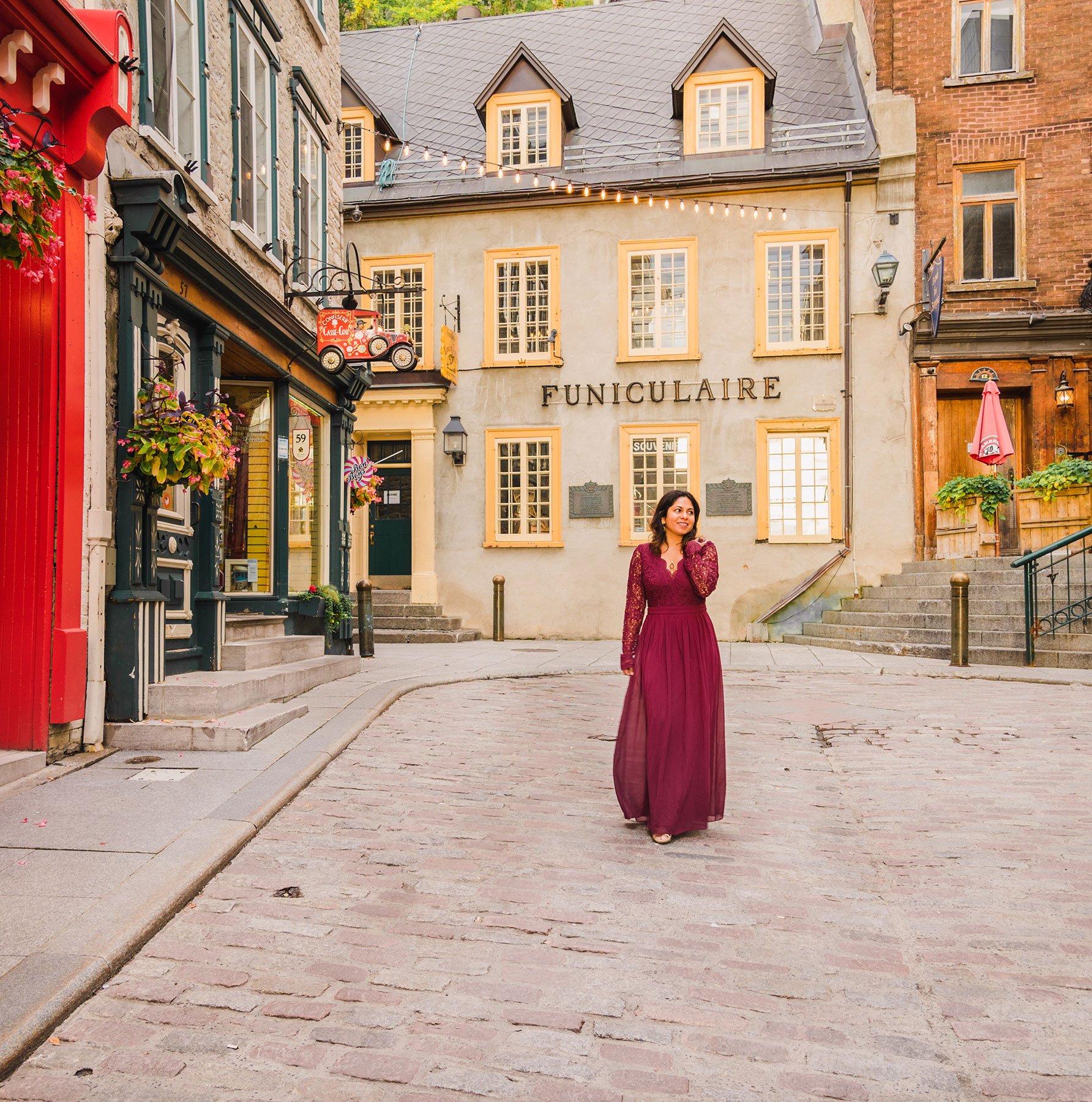 On the other side of funicularaire is Rue du petit Champlain. 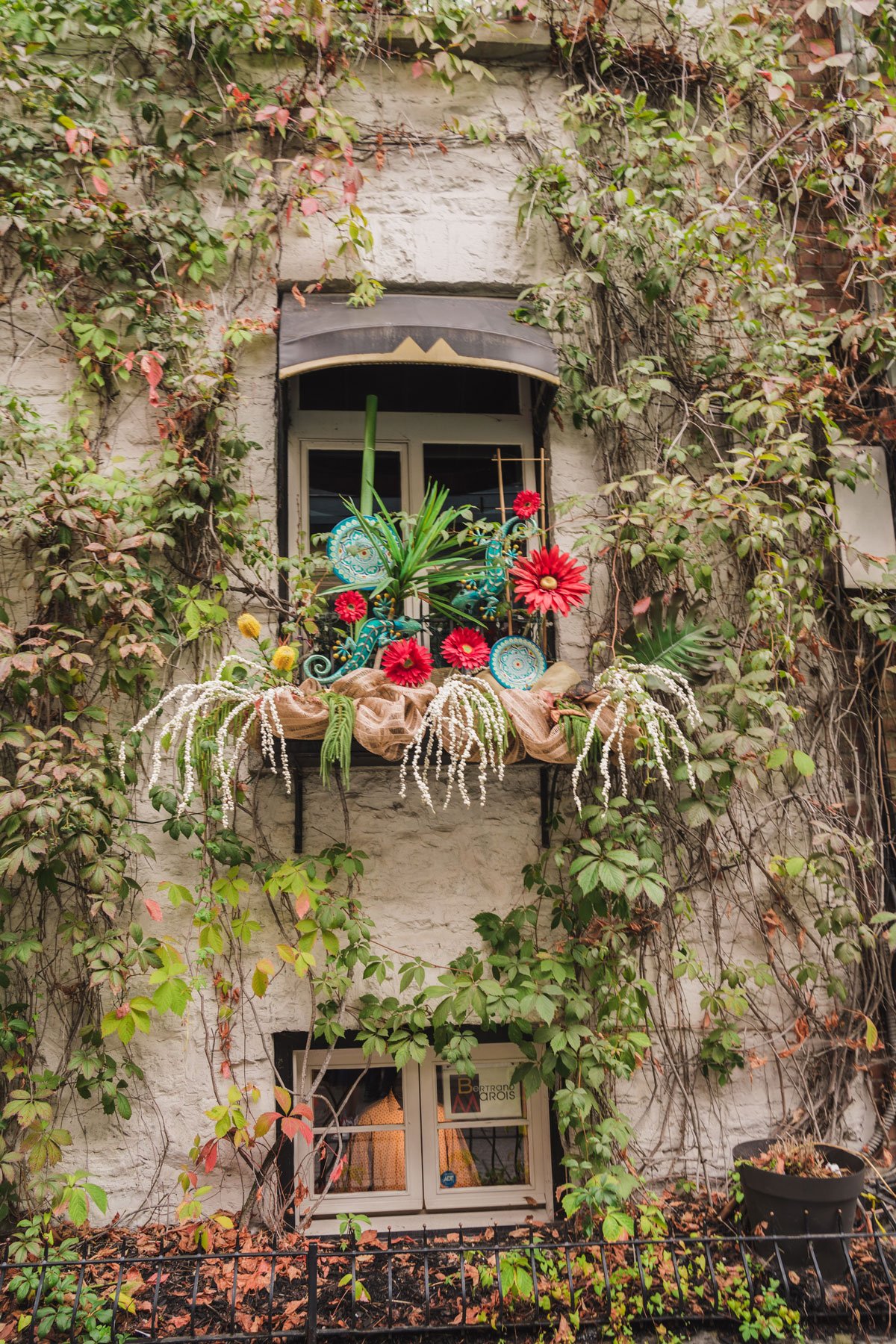 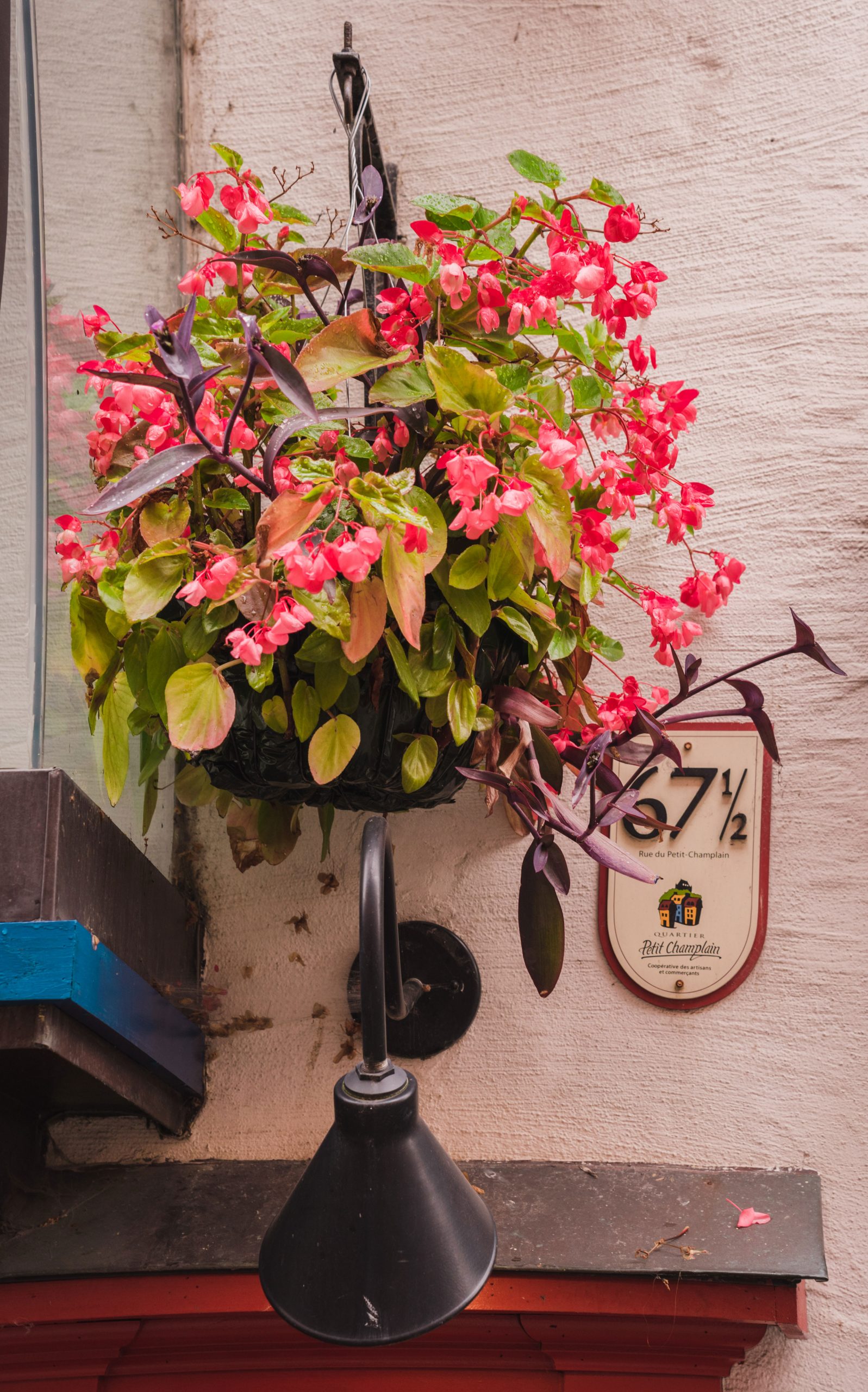 There are many cool places to eat and pretty spots to admire here. Creperie et Cie on Rue du petit Champlain is a good place for some delicious crepes.

Stop for a maple taffy at La Petite Cabana a Sucre.

From Rue de Petit Champlain, walk to Rue du Cul de Sac full of colorful umbrellas. I always wanted to find these colorful umbrella streets and was so glad when I saw this one in Québec City. There are also many restaurants with a patio and you can have the unique experience of dining under colorful umbrellas! 🙂

Then head to Rue du Notre Dame and Place Royale. 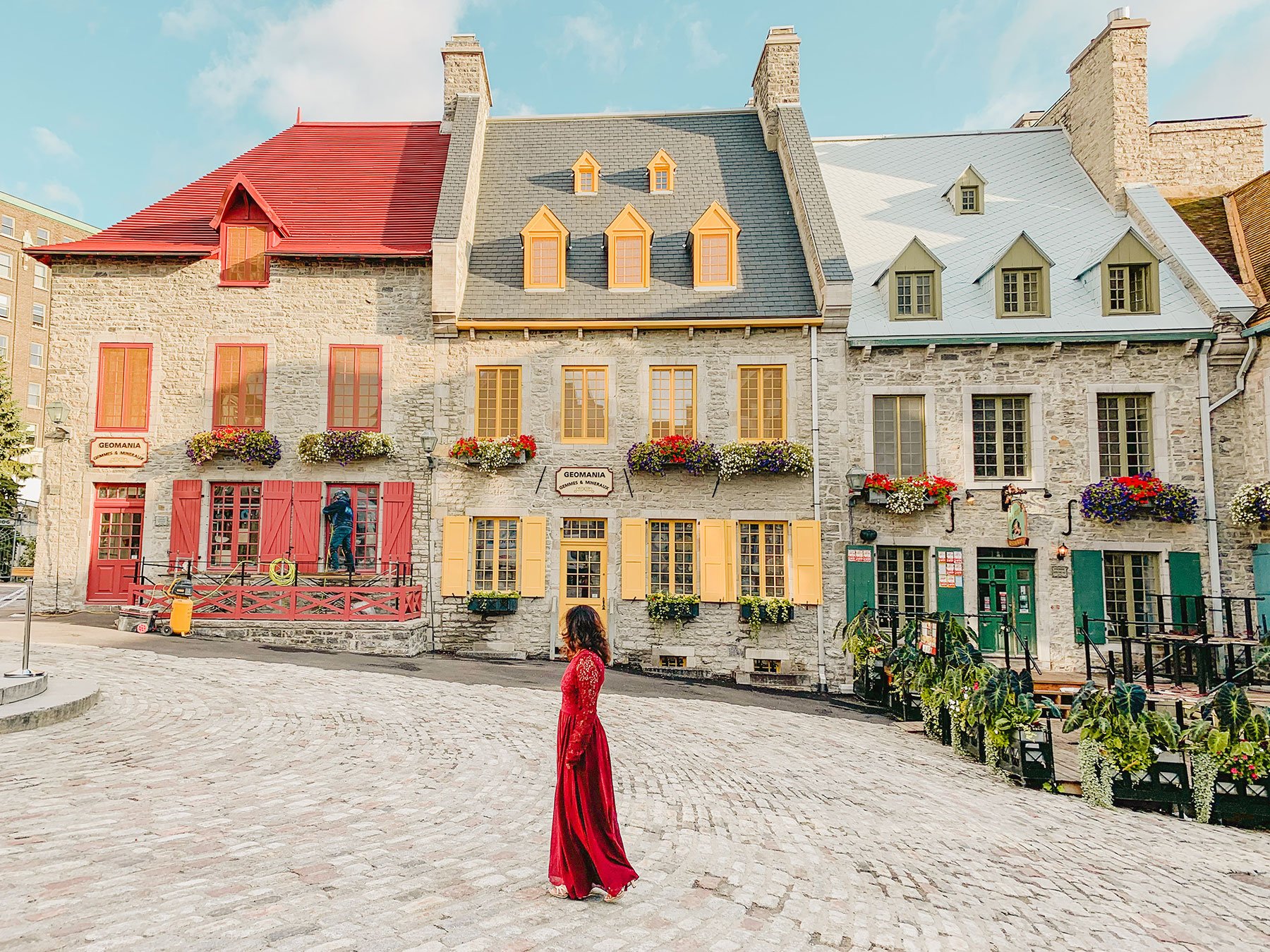 Stop at La Maison Smith for a coffee. This coffee shop is one of the best places to enjoy a great view of Place Royale.

Walk past Place Royal and you will arrive at the most beautiful and life like mural you will ever see – La Fresque des Québecois. It is the most stunning mural I have ever seen and so life like! 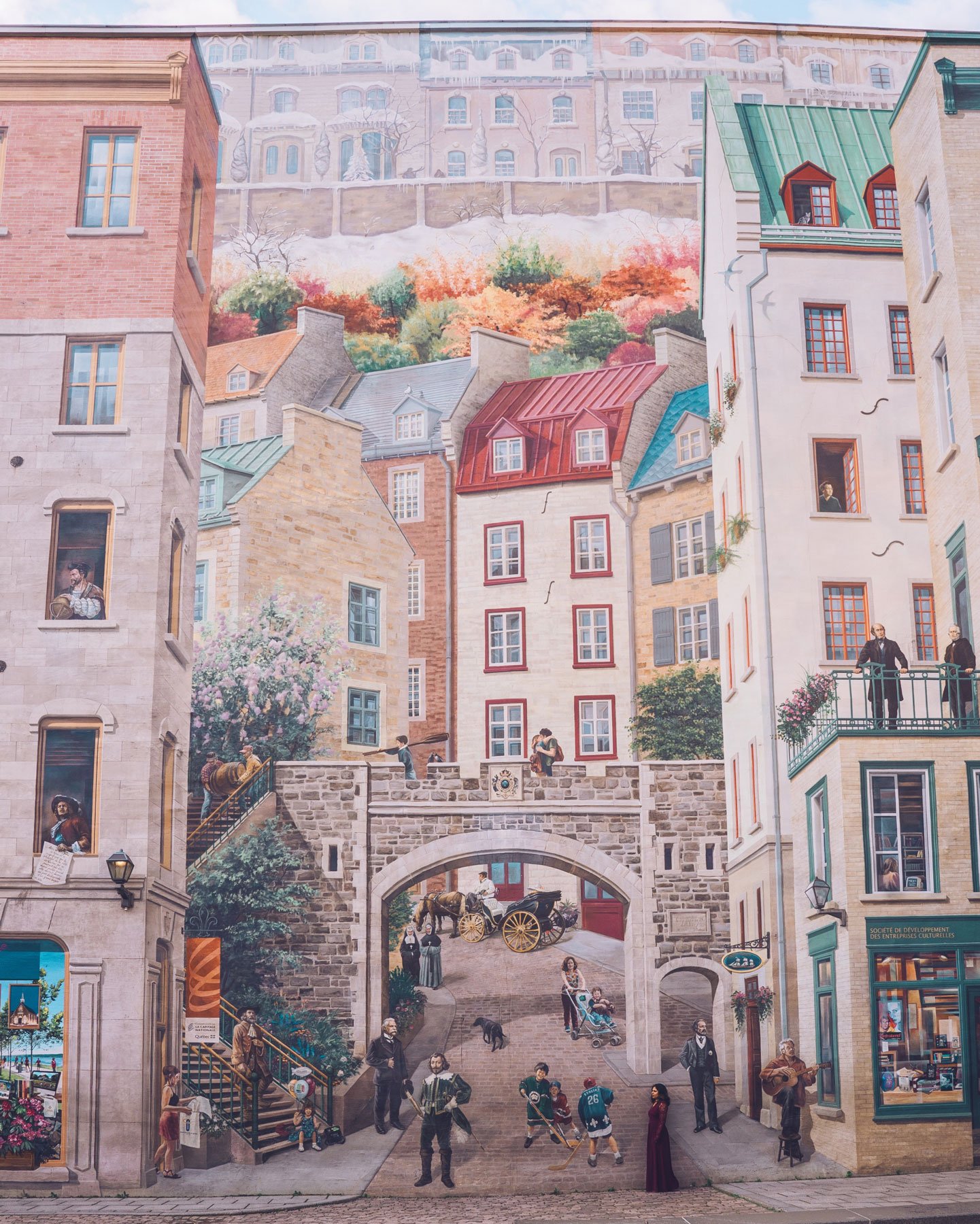 There are also many galleries in the area, visit one of those for artwork made by locals.

Walk around Rue de la Place, Rue St Pierre and visit the Royal Battery. It was built by the French in 1691 and has a significant role in the Battle of the Plains of Abraham.

After exploring Quartier Petit Champlain, hop on a ferry to Lévis. The ferry ride is 15minutes long and Lévis is perfect to watch the sunset over Vieux-Québec and Chateau Frontenac. 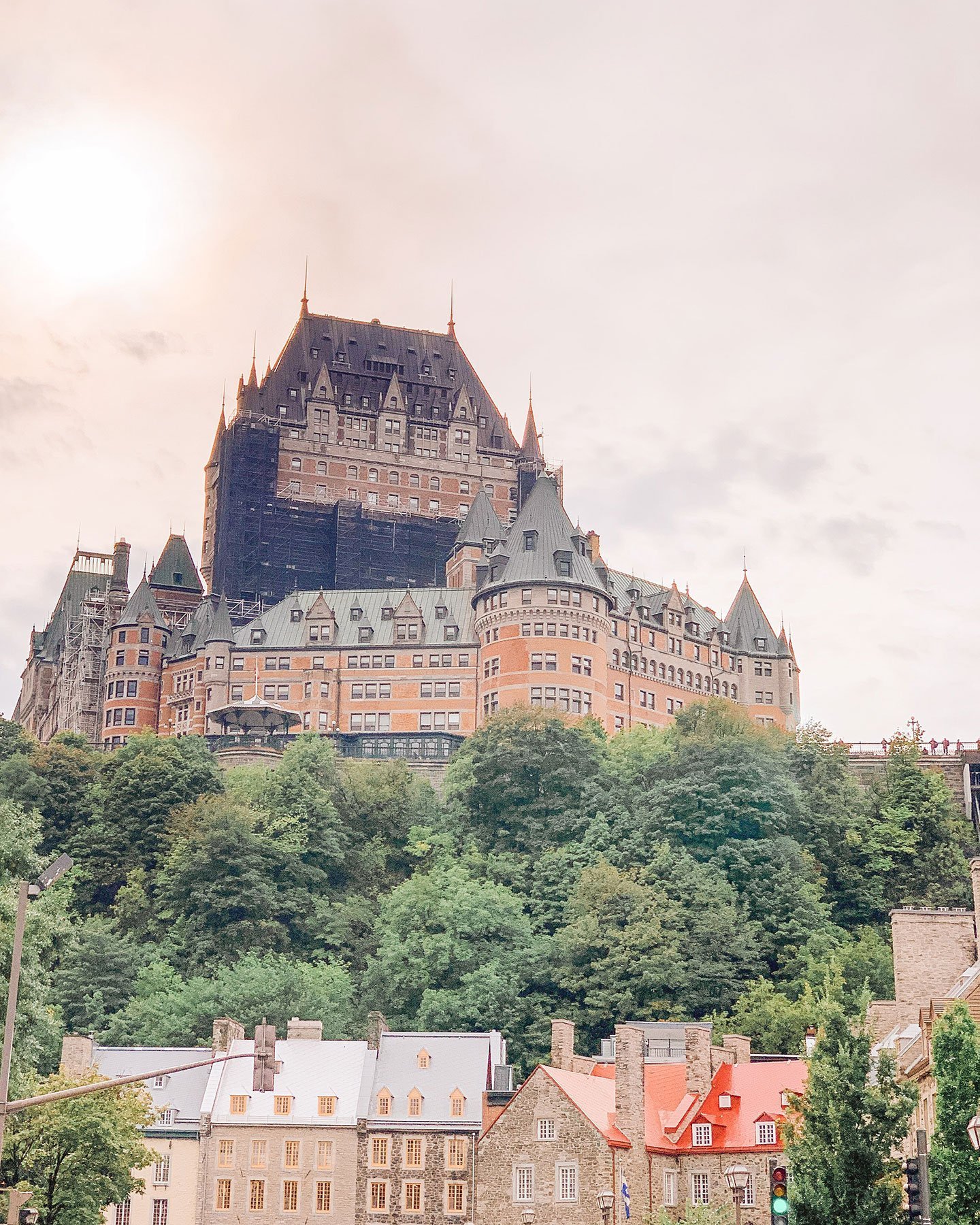 Alternatively, if you have more time to spare, take a 2 hour trip to Montmorency falls. The park is only 12Km from the center of the city and some companies also organize bike tours.

End your day with dinner at one of the many restaurants in Quartier du Petit Champlain.

Spend Day 2 exploring the upper portion of Old Québec City. Start at Chateau Frontenac. This iconic hotel is historic and grand in so many ways. Visit inside and take a tour of the hotel. The interiors are filled with historical details of Québec City and history of the hotel itself. 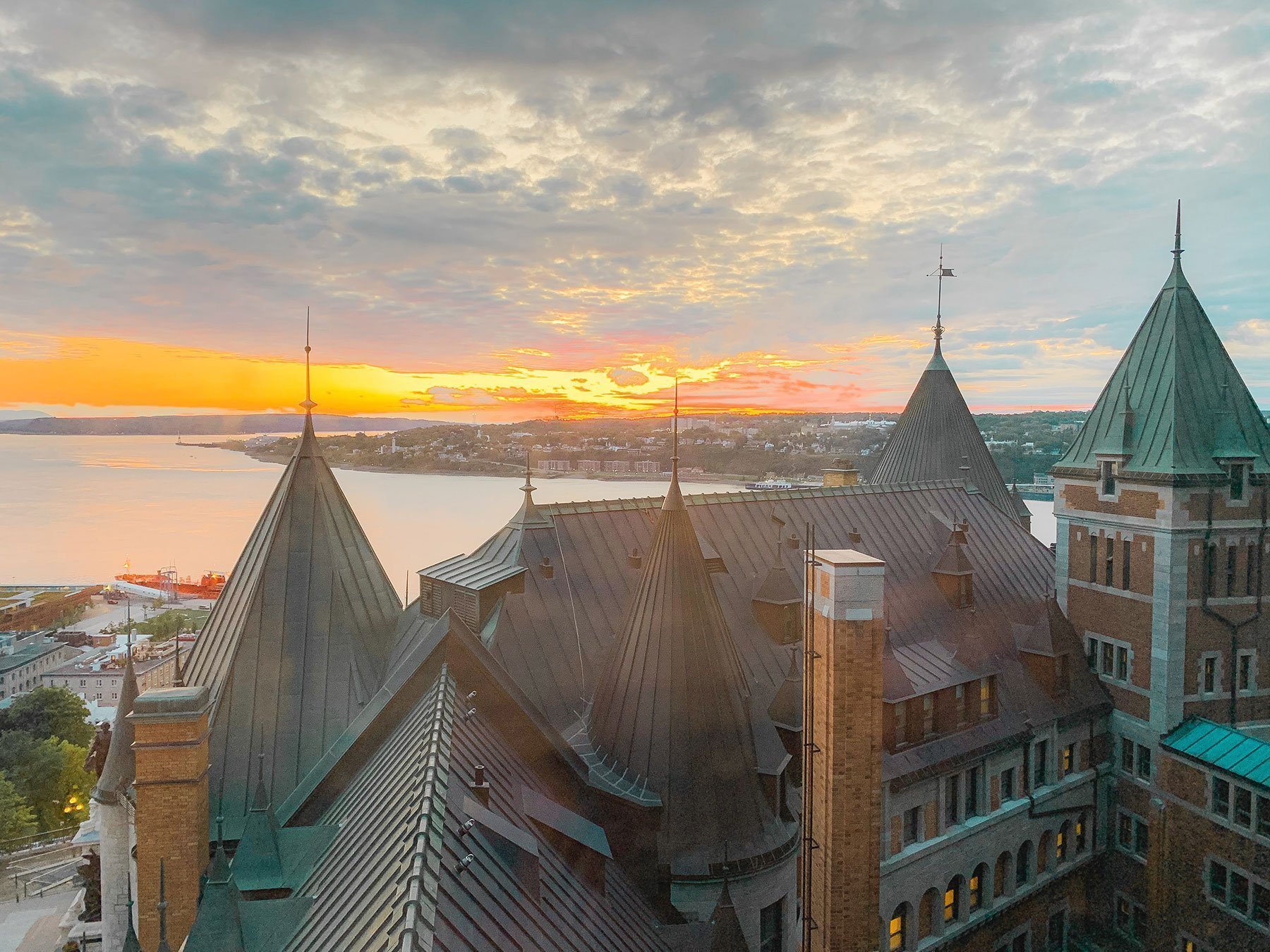 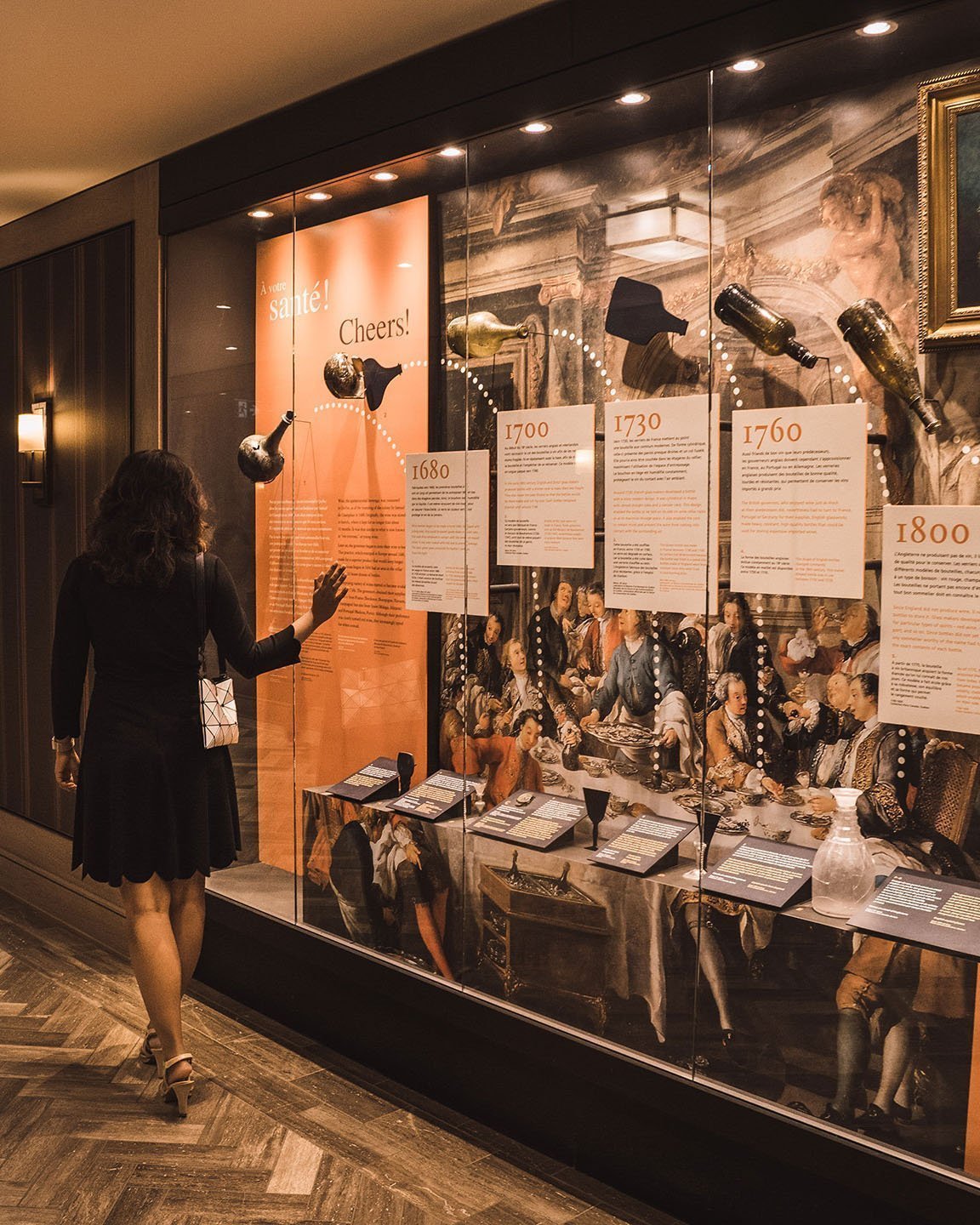 Head to Terrace Dufferin for a better view of Chateau Frontenac. 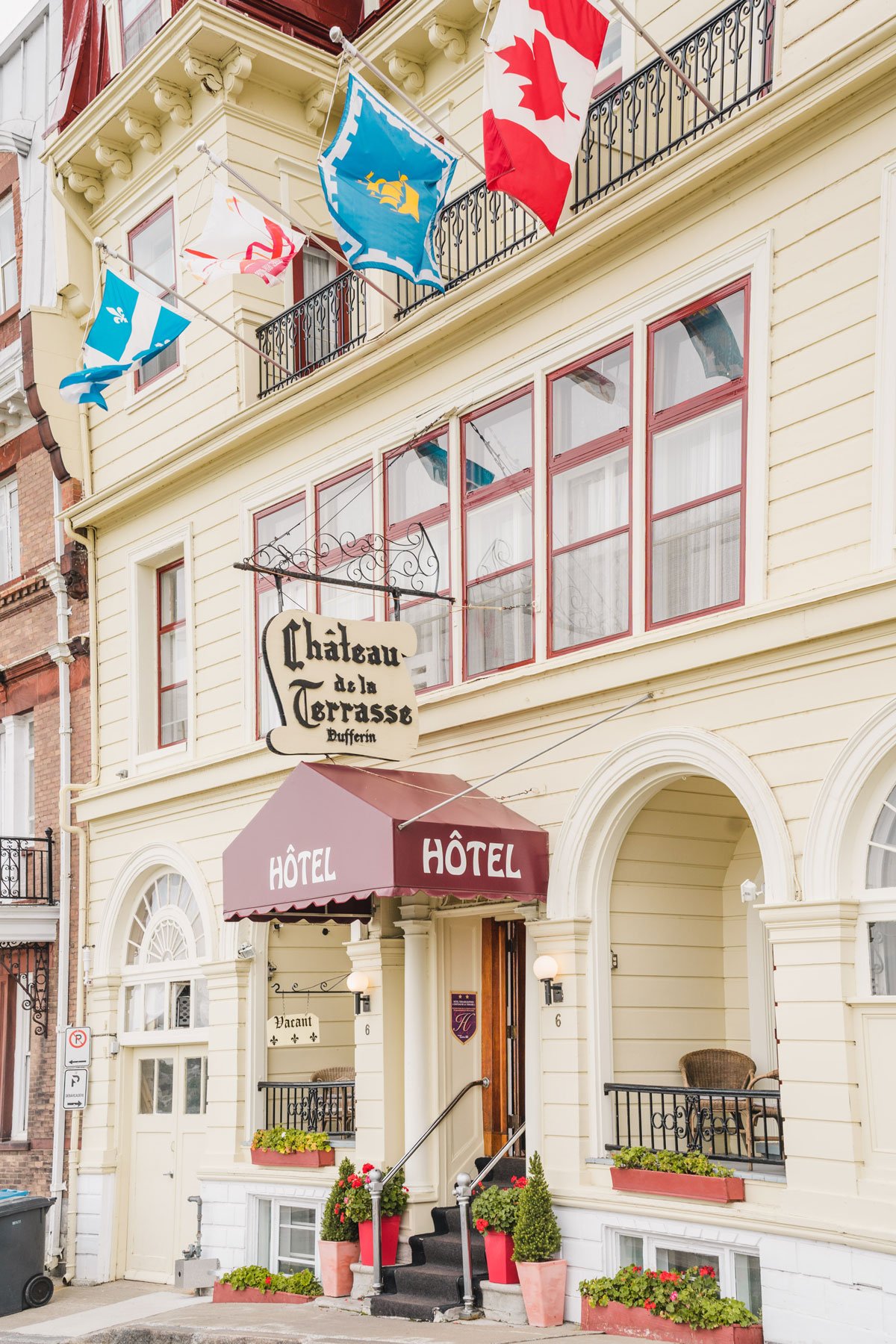 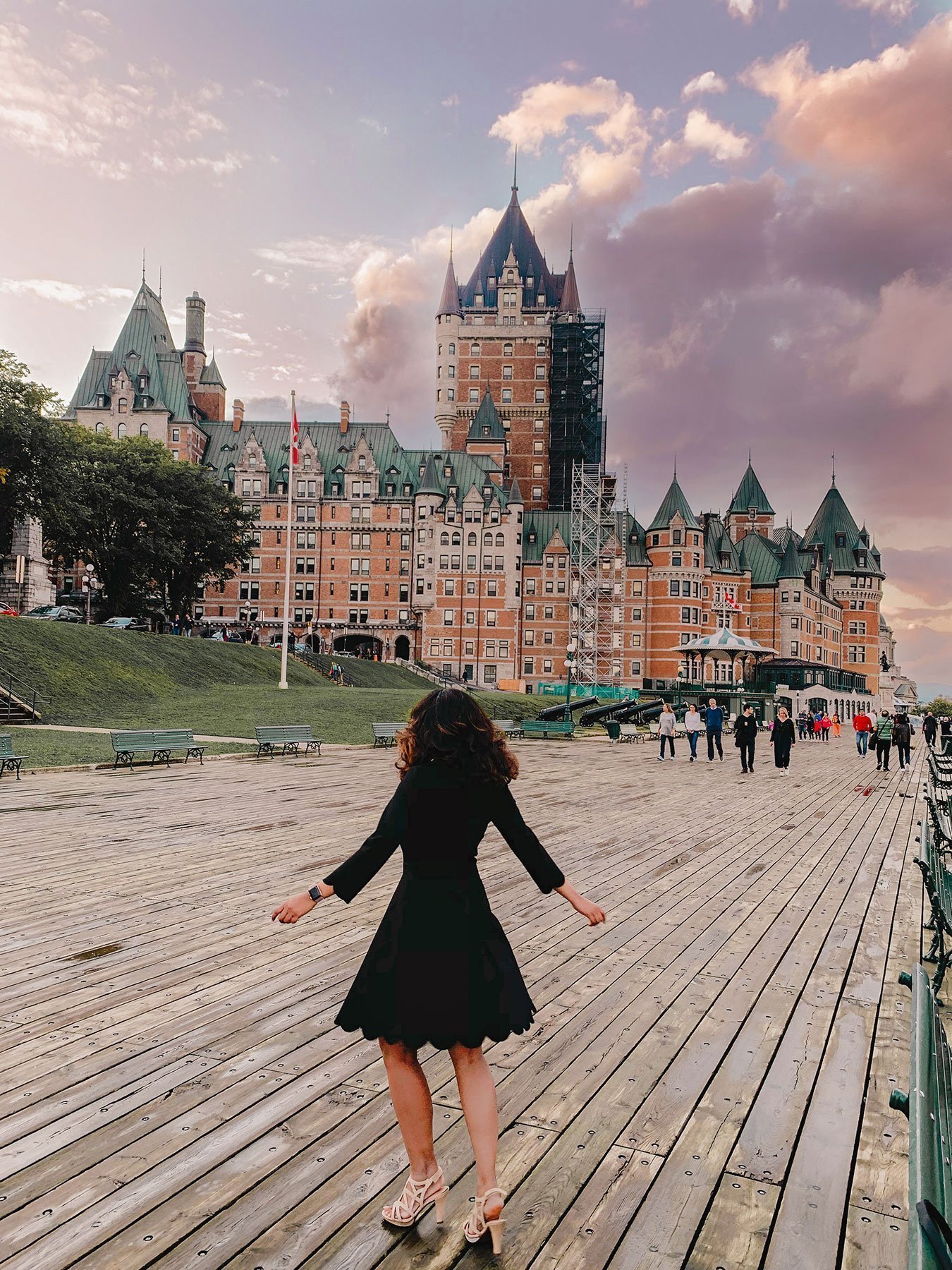 Past Terrace Dufferin is the Plains of Abraham – the location of the famous battle between the French and the British. 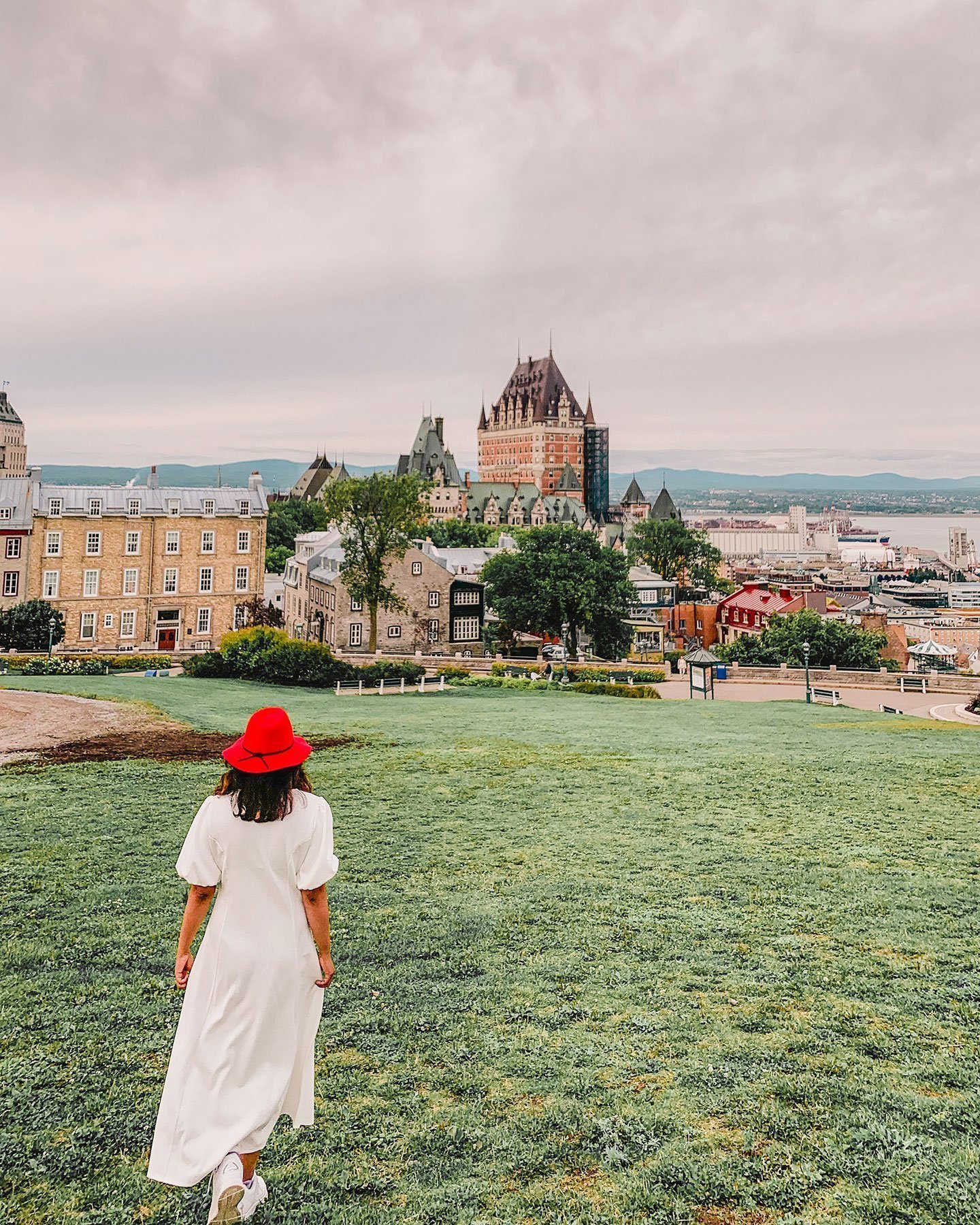 Other places to visit in upper Quebec city are –

Morrin center – A prison turned into a library. 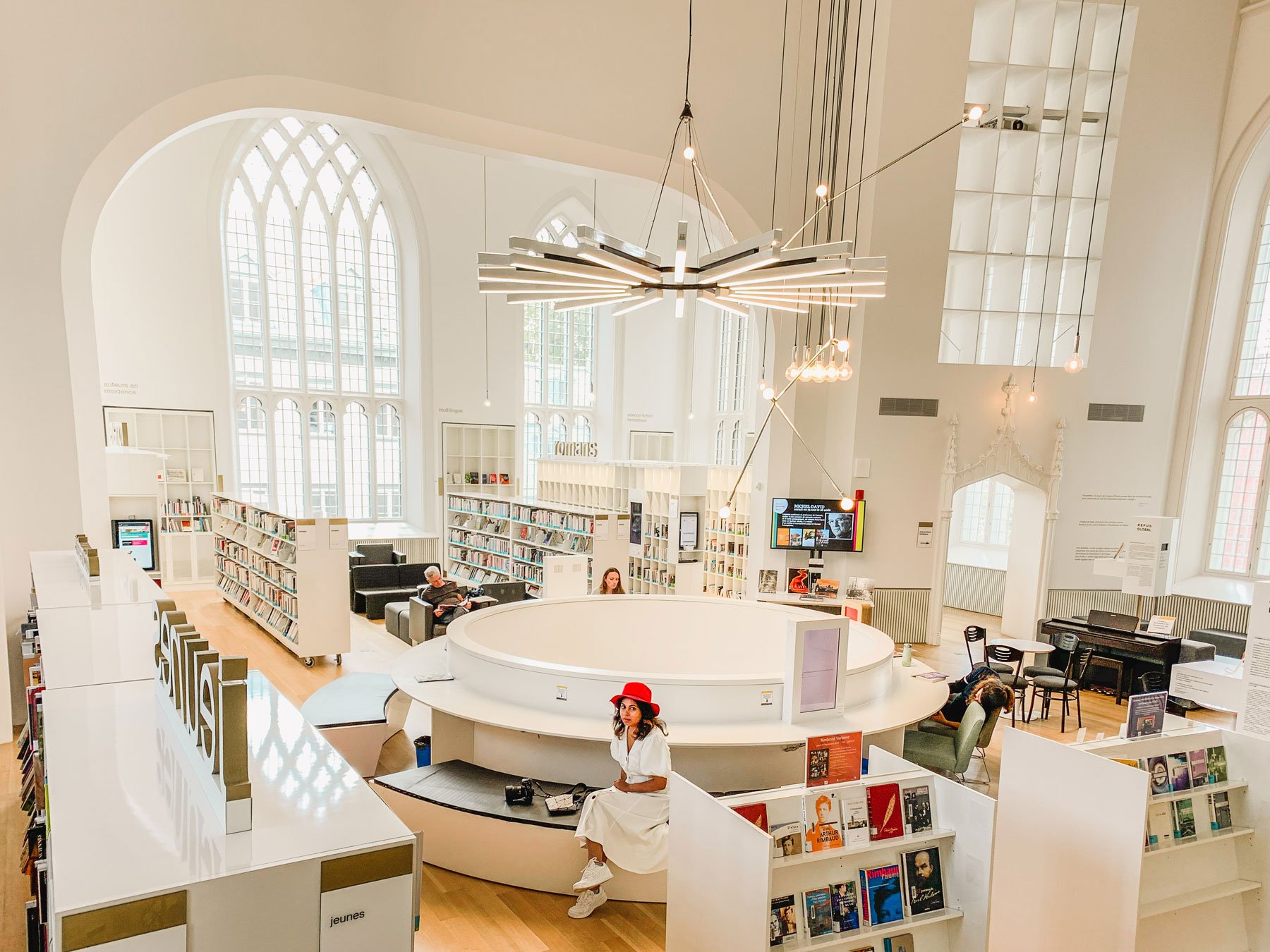 Monstère des Augustines – A monastery of Augustinian nuns turned into a hotel. We were fortunate to get a tour of the place and it was so interesting to hear about Augustinian nuns and how they do not have any interaction with the outside world. The guide told us that there are very few (less than 10) Augustinian nuns left. 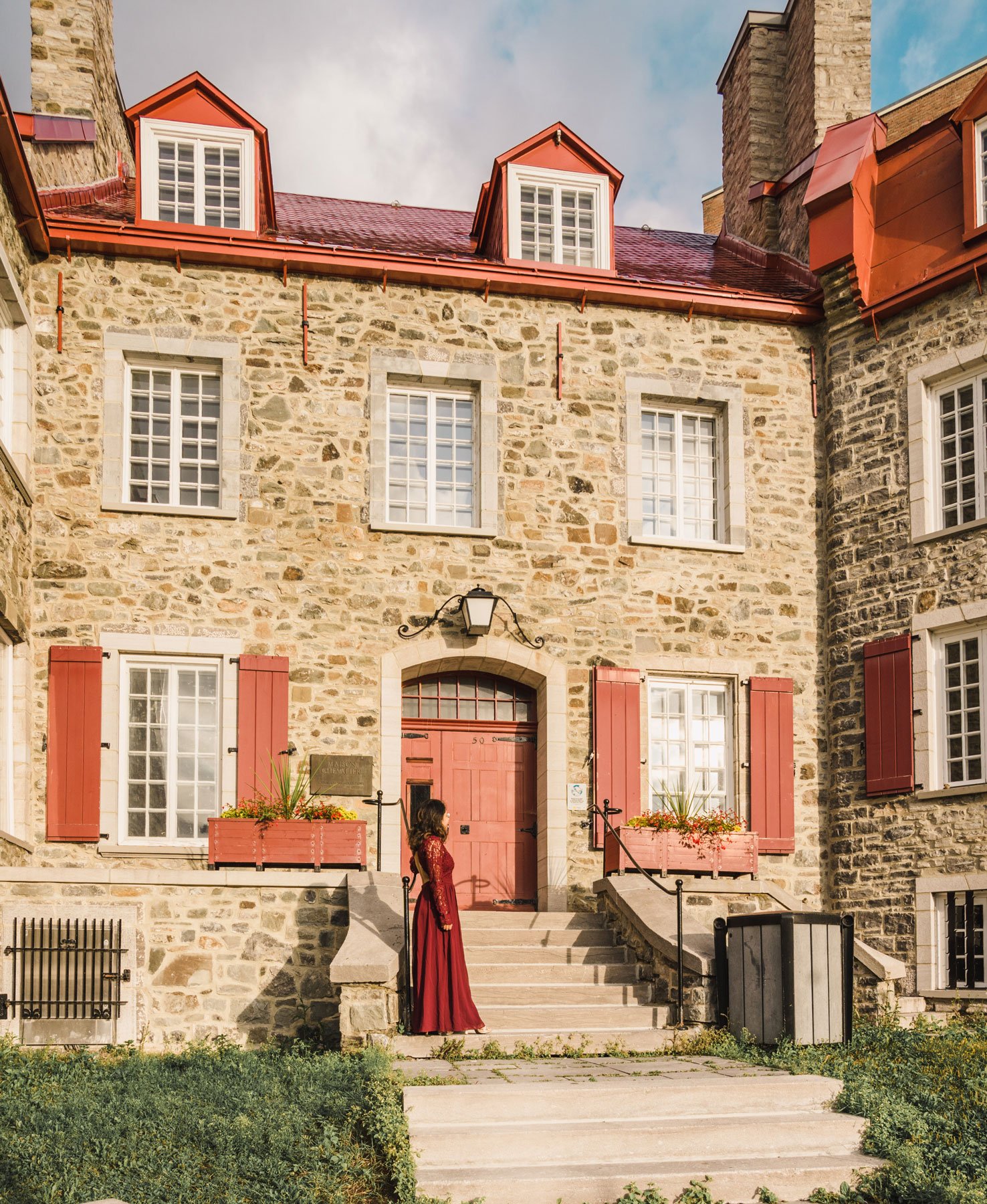 Notre-Dame de Québec Basilica-Cathedral – Not as famous as the Montréal one but is still pretty nice and good to visit.

Place d’Armes and Rue Saint-Louis are also fun places to walk around in upper Vieux-Québec.

And finally, visit the fortifications and citadelle of Québec City.

End your day with dinner at one of the many restaurants on Rue Saint-Louis or the restaurants in Château Frontenac.

The best way to explore Québec City is to walk a lot. I also suggest taking a walking tour to learn more about the history of the city.

Québec City is one of the most beautiful and charming places I have been to and hope you get a chance to visit (if you have not already)! 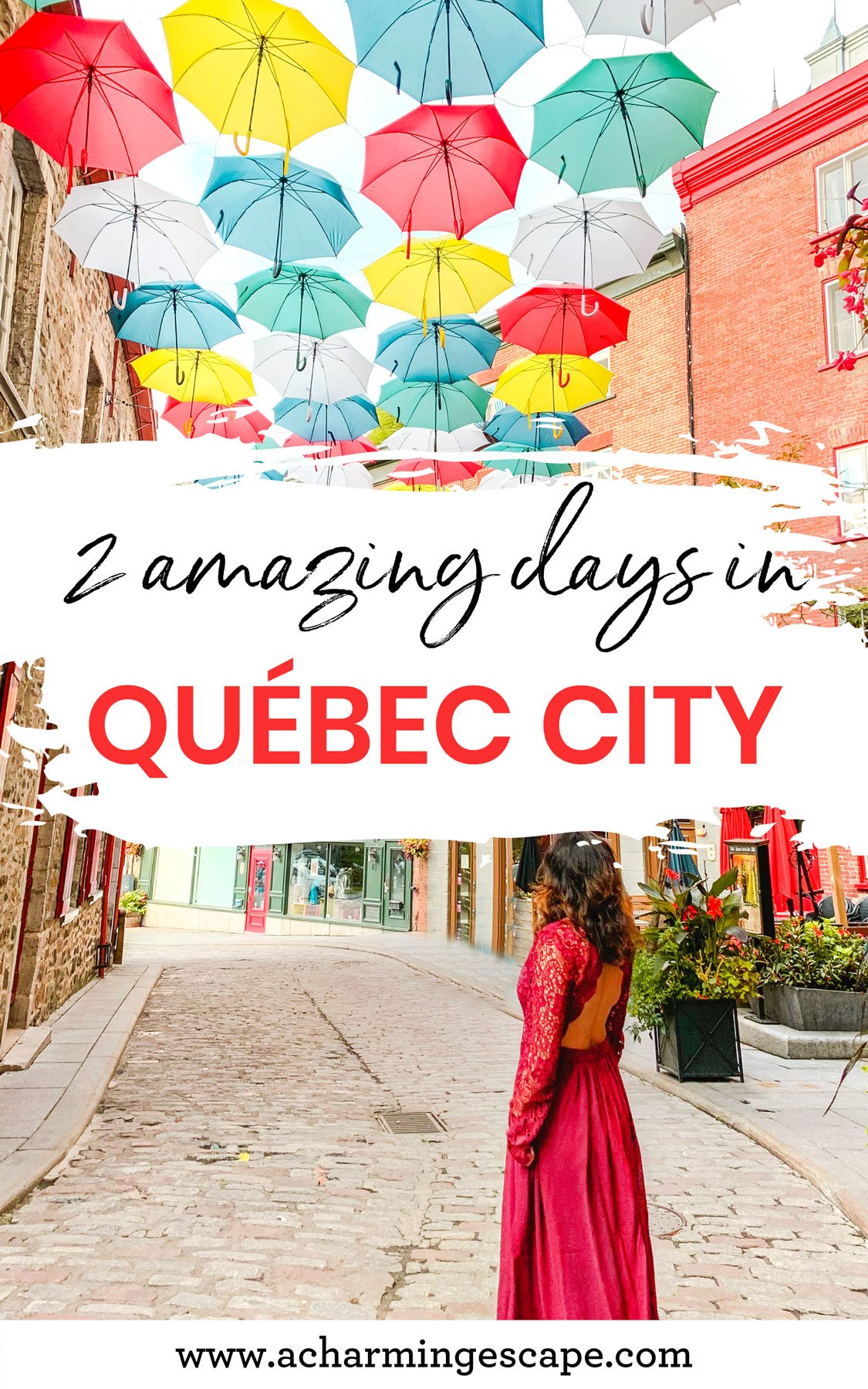 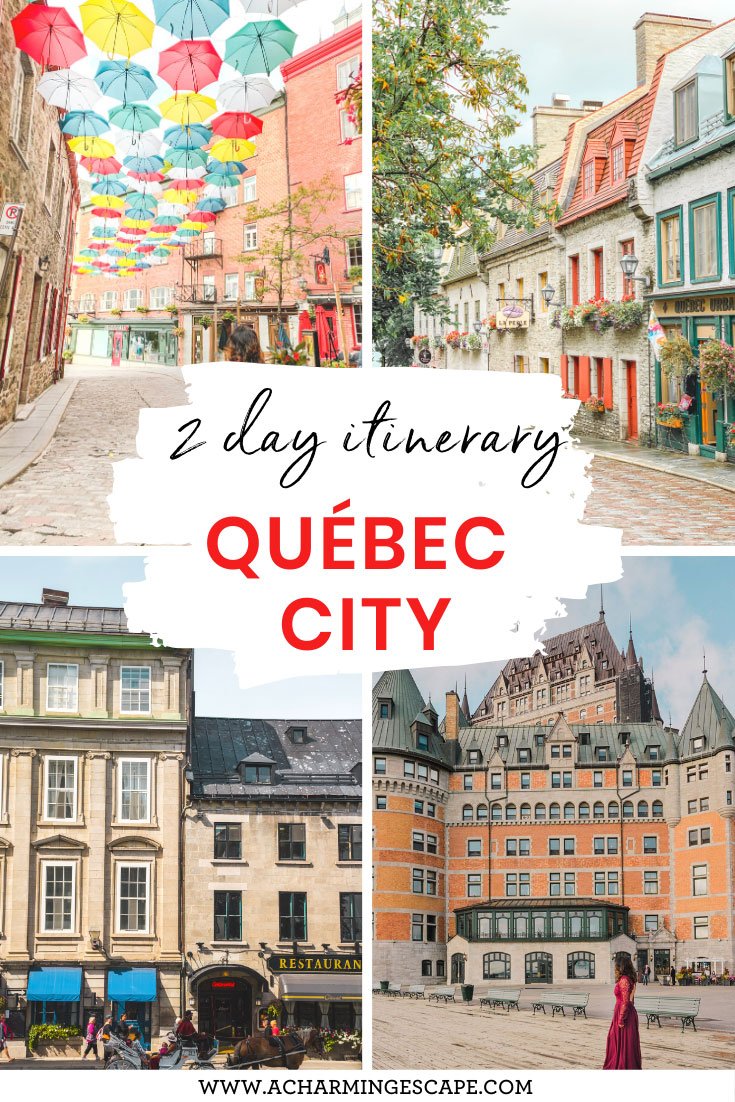